Never in my life have I been excited about "politics" as I am today. I am truly excited and I can and will say that for once....or perhaps, for the first time, I am proud of my country.

Whew! Yep, I said it and I agree with Michelle Obama. I UNDERSTAND what she meant. The nitpickers jumpped all over her statement and wanted to make it seem as though she was not "patriotic". They failed to see what she meant. My thoughts are that she meant that after such a long and horrific history of racism (and perhaps even sexism), America is FINALLY getting it right.

Why has it taken so long for our country to even be in the position we're in today? There is a real chance that our next president will be a Black man! A man who is capable to run this country. Maybe one day, we won't have to even point out the obvious..... .that he's Black. But today it is necessary because for way too long, America has made it impossible for a Black man to have an EQUAL opportunity in this. 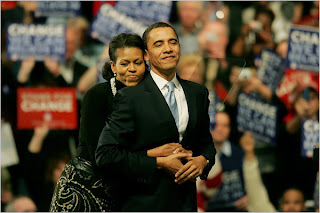 I absolutely love this picture. I can't even find the words that express my pride and excitement about them.

I go to vote in the primaries on March 11th. That is if it will be necessary (perhaps Hillary Clinton will have dropped out of the race by then). This is history and I am so excited about being a part of it. Even if Hillary is still in the race by then, it will still be history because not only will a Black man's name be on the ballot for the president of the U.S., but a woman as well! Both, a first!

It is no secret that I am voting for Barack Obama. I am thrilled to finally see his campaign ads on television, and I have signed up to be a volunteer for his campaign here in Mississippi. I am just hoping that my new state of residence will get it right. I have to admit that I'm a little bit concerned, as this state, several years ago and before I became a resident, voted to KEEP the confederate flag as the state's flag. I couldn't understand that.

Anyway, I am excited! Oh, have I said that I'm excited? LOL! I know no other word to describe my feelings.

This is history and I'm proud to see it unfolding.