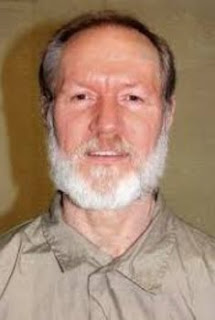 Thomas Silverstein entered the federal prison system in 1975 after he was convicted of three bank robberies that he pulled with his father and his uncle. He was 19 years old.

By age 23, Silverstein came to the dim realization that his life was over.

“I was 23 when I was sentenced to 15 years for that robbery,” Silverstein wrote in his declaration. “My share of the proceeds was a few hundred dollars. My life on the outside was over forever.”

Silverstein was sent to the U.S. Penitentiary in Leavenworth, Kan., where he said life was divided along racial lines, and “newcomers had to be careful not to show any weakness.” (source: “Hot House” by Pete Earley)

Racial lines? Silverstein imaged his white skin made him particularly vulnerable in a prison overwhelmingly black and brown. Did this white youngster think that he could come through the doors without being tested? Nobody was given a cakewalk through prison, white, black, or brown. Every man was required to stand on his own two feet, and no man can defend another man’s honor. To a fearful man that meant kill or be killed, Silverstein took the offensive side of his paranoia.

“I tried to tell Cadillac that I didn’t kill Chappelle, but he didn’t believe me and bragged that he was going to kill me,” Silverstein recalled. “Everyone knew what was going on and no one did anything to keep us apart. The guards wanted one of us to kill the other.”

NOTE: If everyone knew what was going on, why would anyone get between them? Every beef was personal, one on one. And sometimes the guards didn’t care who won or who lost. One warden declared if he had his way, he would arm us all, and let us kill each other off. And more times than not, white prison guards would side with white inmates.

Silverstein claimed that “the guards wanted one of us to kill the other.” This was the rules of the game. There is no concept of fairness. It’s only about who comes out alive. Maybe this was the guards’ way of killing two birds with one stone.

Why did Silverstein lie to Cadillac? It would have been more honorable to confess killing Chappelle for raping a weak white inmate. But there was an unwritten rule: Whites do not kill Blacks in prison, otherwise it would set off a race riot.

It is still a mystery how Silverstein and Clay Fountain broke out of the locked recreation cage on H-Block, with shanks, at exactly the same time, Cadillac was being escorted to the showers in handcuffs. When the attack unfolded, the guards fled. Silverstein and Fountain stabbed him 67 times and proceeded to drag his body from cell to cell, stopping in front of every black inmate’s cell, according to Ned Bailey who witnessed the assassination.

(From “Hot House”) Silverstein wrote “After I killed Smith, I lived in constant fear of reprisals. It was in this frame of mind, and believing I was in a life-threatening situation, that on October 22, 1983, I killed Officer Clutts.”

Silverstein’s fate was sealed. He dug for himself a hole that he could not get out of and would spend the next 37 years of his life in the hole, with no human contact, until he died on Saturday, May 11, 2019.

COMMENTARY: I teach young men to avoid the hellholes of prison at all cost. There is a hole so deep that they call it “the end of the line”. Silverstein started with only a 15-year sentence and buried himself with multiple life sentences

Did he have any final regrets? After all the BBC dubbed him “the most dangerous man in America”. One would imagine he would play the role of a tough guy to the end. Not so.

In an article he wrote a few years ago, Silverstein called solitary confinement "a slow constant peeling of the skin, stripping of the flesh, the nerve-wracking sound of water dripping from a leaky faucet in the still of the night while you're trying to sleep. Drip, drip, drip, the minutes, hours, days, weeks, months, years, constantly drip away with no end or relief in sight."

When a man rots in an isolate dungeon, his skin begins to peel off the bone, like Hiller “Red” Hayes, whom I describe in “Breaking Men’s Minds”.

Silverstein wrote an apology, published in Earley’s “Hot House”: Even writing this declaration, I feel my words of regret are inadequate to explain the remorse I feel… There is no justification for my actions.”

COMMENTARY: I believe every man can change. Silverstein confesses, before his death, that there was “no justification” for his action. But regrets remorse sometimes come too late. Nothing could change his fate.

Although the U.S. Supreme Court, the United Nations, and the Red Cross all declared that endless years of solitary confinement was “cruel and unusual punishment”, there nothing anyone could do to get Silverstein out. And no amount of remorse could redeem him. His inevitable demise would be a slow and torturously long agonizing death, like a man buried alive.
Posted by Eddie G. Griffin at 8:31 AM No comments: