Through These Brown Eyes- I Saw Obama

I watched Barack Obama from a VIP seat inside the downtown Fort Worth Convention Center, up close, about as good as it gets. I need no re-broadcast of the nightly news on ABC, NBC, CBS, or FOX. I don’t have to read some shoddy report from the local Star-Telegram newspaper. The mass media can kiss off Eddie Griffin, because I saw it all for myself. 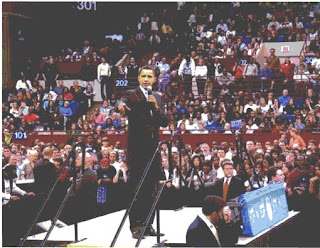 (Photo Thanks to Aretha B. Hall, Fort Worth)

Over 10,000 people moved effortlessly into the convention center, as smooth as silk. The Obama Team on the ground was ready for the crowd, and well organized. That was something else that amazed me- how well organized was Obama’s people.

The day that the volunteers trained for the convention center assignment more than 300 people showed up. People coming into our Obama field office on Evans and Rosedale were turned away. Joe Boswell would say to the would-be volunteers, “We have too many volunteers already.”

We did. We had put an army on the ground in three days, rallied nearly 60,000 early votes and hailed a capacity crowd at the downtown convention center.

Wouldn’t you know it? The first person on the platform to kick of the rally was, none other than, Joe Boswell, looking like he had gone three-days without a shower, living solely on McDonald’s. I worked beside him, and he is a man absolutely focused.

This morning, I gave Joe a “brother hug”, a white boy working his butt off to get Barack Obama, the first African-American elected president. He calls himself a “white slave” for Obama. I hope people like Joe Boswell make it to the Whitehouse.

The March 4 primaries are on Tuesday. Today is Friday, February 29, 2008, and counting down.

I cannot name all the volunteers from my email network of 970 people, but there were people there that I never expected to see. And, there was not an empty seat under the dome.

They started playing my song: “Ain’t No Stopping Us Now”, and suddenly, I was into it. Around and around and around, the crowd’s wave swept across the auditorium like a rolling tide. In the meantime, all the television networks were turned off. They wanted only a 30-second blurb for the news, and the newspapers wanted 1,500 words or less.

And, what they didn’t see was Joe, and hundreds of volunteers like Joe.

The mass media has been making a big deal about demographics- race, age, and gender. I sat next to a 9-year old white boy, whose dad brought him to the rally. They were my fellow VIP-seat observers. When Obama hit home the point about bringing our children back from Iraq, the white father gave me a high-five. He has another son, fighting in his third tour of duty in Iraq, where he has been stationed for the last two-years.

Yeah! It was emotional, I admit. But then what’s wrong with a tear in the eye every now and then. But the mass media did not show close-up of the tears in people’s eyes.

Where was Race? Where was Age? Where was Gender? I didn’t see any. I saw people caught up on Cloud-9, hoping, wishing this moment never end.

It surprised me how alienated we are from each other. Very few people made eye-to-eye contact. They were mostly members of families, personal friends, clubs, churches, and so on, all in their own little worlds. But one thing we had in common that drew us together in mutual affections was the man: Barack Obama.
Posted by Eddie G. Griffin at 9:22 AM