Precinct 1079 elected Delegate 1066 at the Tarrant County Democratic Party’s Senate District 10 Convention on Saturday. Like a salmon swimming upstream, he will advance the next step to the Texas State Convention in June. And so, Precinct 1079 cast its one allocated vote for Barack Obama for President of the United States. Delegate 1066 will carry the precinct vote to the state convention, a state still vying between Obama and Clinton delegates.

The morning Star-Telegram reads: “Obama is victor in weekend caucuses”. The word “victor” sends a proud chill through my vein. I was on the winning side, one of the victors in the second round caucus.

At least 3,000 delegates descended on the Will Rogers Coliseum from their precinct caucuses to comprise the Senatorial District 10 convention. The climatic conditions were chilly and drizzling skies made for a long uncomfortable wait. 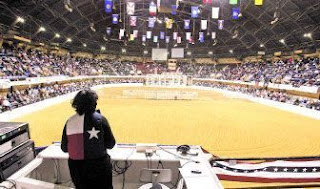 Precinct 1079 was first in battle at the door, thanks to Ms. Gentry freezing in the cold for an hour, holding down a spot for all of our delegates at the front, so we could enter as a group. It took forever, getting in, getting settled, and getting our credentials. Nerves began to fray.

“We, Democrats, can win back the Whitehouse, if we don’t kill each other first,” one of the politicians declared. But this wasn’t that kind of fight. Instead of civil war, this was a war of attrition between who could stick it out and who couldn’t, a 14-hour marathon between survival of the fittest.

Eddie Griffin survived as Delegate 1066 and was elected to represent the Obama vote at the state convention. Ms. A. Y. Collins, a longtime black lawyer in the city of Fort Worth, became the alternate.

As for the Hillary Clinton delegate in our midst, we knew not where she disappeared. We speculated that she had been kidnapped, gagged, and duct taped, and stashed in the horse stalls. We found ourselves jubilantly singing, “Na na na. Na na na. Hey, hey, hey, goodbye”, in a teasing way to the Clinton delegate who abandoned ship.

How did she come up out of the ‘hood as a Clinton delegate, we wondered. She must have realized that her one little vote was meaningless in the delegate selection process. Even more, she wound up voting on nothing, and did not factor at all in the convention. She had wasted a day.

Spectators looking down on Precinct 1079 must have thought we were crazy, dancing in the aisles like we had just ridded itself of a thorn in the flesh. Then the kid gloves came off after hours of waiting, frustrations, and endless wordy resolutions.

“Madam Chair, can you tell me when we are going to start conducting business… Madam Chair, I move that we limit the reading time of the resolutions… Madam Chair, some of us have children and sick parents, we need to get home, can you expedite this process,” they bemoaned, one after another.

Patience, she asked? The Credentials Committee first had to deal with all the complaints and challenges that originated at precinct caucus during the March 4 primaries. There were a ton of complaints and challenges, from allegations of delegation stealing, to too many delegates from various precincts, to voter intimidation, and rumor had it that Hillary Clinton lawyers were looking over the shoulders of the committee, looking for flaws in the process. Still they got it wrong in some cases, leading to a chorus of boos from the crowd.

When the Credentials Committee report came in there were some three or four precincts that had no delegates at all, because they held no caucuses.

What? Boo! We knew better. Other precinct delegates were “realigned”. Boo!

“The Chair does not recognize you,” she replied to one particularly pesky delegate. “We will continue. Resolution number thirty-five.”

Sheesh! Only twenty-one more long-winded resolutions of WHEREAS and WHEREFORE and BE IT RESOLVED, come on, I needed a break. Madam Chairman needed a break too.

“Please don’t leave,” the Madam Chairman called out. “You need to complete the process.”

We missed a golden opportunity early on to capture the convention chair when our precinct chairman, Ms. A. Y. Collins, was nominated for the position by Ms. Williams, also of Precinct 1079. Before our leader to reach the podium, votes were cast and it appeared that Ms. Collins beat out the old Democratic Party leader. But we could not relish in the coup d’etat, because shortly thereafter, Ms. Collins declined from the race when someone called for a manual re-count.

Her stated reason: To expedite the convention without a tedious recount. Many grassroots voters were terribly disappointed. But we had made our statement. Precinct 1079, one of the poorest districts in the nation, carried the spirit of this convention and party leaders could rest assured that we would be back.

Thousands of delegates gathered at the Will Rogers Coliseum, where the arena floor was still covered in dirt from a cutting horse event.

Many waited for hours -- listening to candidate speeches, standing in line for food, listening to music blaring from the loudspeaker -- as they waited to sign in, get credentials or vote on delegates.

By 6 p.m., less than half of those who came in the morning remained.

"This is a very frustrating process," said Al Wade, an Obama delegate. "You'd think it was designed by Republicans to irritate Democrats."

Through the day, officials urged delegates not to leave. After hours of delays, many increasingly frustrated delegates began speaking out.

"I make a motion that this nonsense end right now and we take this to the state," one unidentified man said to convention leaders.

After a while, delegates left in droves.

"It shouldn't have been this difficult," said Donna Domm, a Clinton delegate who left after 11 hours. "It's very disorganized."
Willa Morehouse, an Obama delegate, agreed.