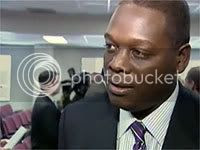 Hat Tip to Sonya at Make it Plain blog, who reports:

Sworn in as Dallas County district attorney on Jan. 1 -- he is the first elected black district attorney in Texas -- Watkins fired or accepted the resignations of almost two dozen high-level white prosecutors and began hiring minorities and women.

And in an unprecedented act for any jurisdiction in the nation, he announced he would allow the Texas affiliate of the Innocence Project to review hundreds of Dallas County cases dating back to 1970 to decide whether DNA tests should be conducted to validate past convictions. At 12 in the past five years, Dallas has more post-conviction DNA exonerations than any county in the nation and more than at least two states. A 13th exoneration, of a Dallas County man, is expected to be announced within days.

"Of the 12 men exonerated, 9 were African American. Who is Craig Watkins that he would be concerned enough about the notion of justice to invite the Innocence Project to examine convictions obtained by the district attorney's office?" . . . Make it Plain Blog

More at Sonya's Make it Plain Blog
Posted by Francis Holland at 11:27 AM