Since no one else has the guts to ask the question, let me tread lightly then upon this holy ground of race relations. When the police can get on black people’s last nerve is exactly the way I want to frame the dilemma in the contradiction, because there is an ugly rumor that black people generally hate cops.

Let me cut to the chase at the street level. Here is a man who drives up to a black teenager and ask where he might buy some drugs.

Excuse me! The kid reached through the window and punched the white driver. “Git outta my face,” the kid said. The white man was a Fort Worth Police Department undercover agent.

Cut to the chase: The kid was charged with aggravated assault upon a police officer, and they contemplated adding the charge of attempted robbery.

I was infuriated. This happened in my neighborhood, where I teach kids to resist drugs at all cost. So, he punched the sucker in the mouth. Not exactly what I would have done, but damn near close.

It reminded me of an incident that goes all through me.

My cousin, a few years prior, was accosted in the same manner as a teenager. He was a clean kid, all his life, but he knew where there were drugs in the community, and this time he needed the money. So, he took the money from one undercover agent, went around the corner, and purchased some drugs from another undercover agent.

I was livid. It reminded me of my first attempted robbery.

In the 1960s, white people could not freely come into the black neighborhood without knowing somebody or doing some business. Around 1963, they started bringing in drugs, at first packaged like prescriptions. We had no idea they were undercover agents.

As they created drug kingpins, our image, as wannabe Black Panthers declined, because then the debate shifted from socialism to materialism, and the endless quest for the Almighty Dollar. The pimp-hustler-drug dealer image was winning the hearts and minds of black people in the hood.

History may recall, the Black Panthers first fight was against the drug dealers cropping up into the community. No one could snitch to the cops, because some cops were in on it. And, it was a terrifying thought to see the very same cop show up at the snitches' door. Some do-good black people got whacked, because they opened their mouths to the wrong people.

We took care of our business, ourselves, at the street level.

During the era of blaxploitation, actors portraying Black Panther revolutionaries would go in and rob and sometimes shoot up drug dealers. In real life, that led to a street level war, the first wave of black-on-black shootings. The FBI was right there in the mix, sometimes pulling the strings, and sometimes just letting nature run its corrupt course.

I was bar-hopping, hip-hopping, bopping along, from bar to bar one night when I chanced upon my brother Lawrence making a transaction with a white dude. The man wanted a black prostitute, and my brother promised he had just the woman.

When I realized it, I thought: OMG! The man had been sucked in by two Black Panthers. This was a trap, and as Lawrence would say, "a lesson to teach the white man that black women were not for sale."

I was down for jacking this guy. So, I listened to his plan. When the girl got the john to the motel, and made sure his pants were down, she would come to the door, and the stick-up boys would go in and rob him. But that was not what happened.

The john would not take off his pants, so the girl grabbed the portable heater off the floor and crashed it over his head. When she opened the door for the stick-up boys, all I could hear was the man screaming, “Officer, down!”

So, I drove away with tears in my eyes.


How We Became Outlaws 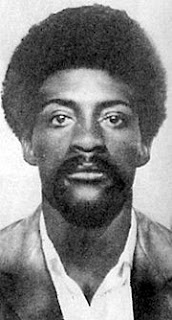 Alprentice "Bunchy" Carter was an African American activist and former gang member who was killed on January 17, 1969. He is celebrated by his supporters as a martyr in the Black Power movement in the United States.

In the early 1960s Carter was a member of the Slauson street gang in Los Angeles. He became a member of the Slauson "Renegades", a hard-core inner circle of the gang, and earned the nickname "Mayor of the Ghetto". Carter was eventually convicted of armed robbery and was imprisoned in Soledad prison for four years. While incarcerated Carter became influenced by the Nation of Islam and the teachings of Malcolm X, and he converted to Islam. After his release, Carter met Huey Newton, one of the founders of the Black Panther Party, and was convinced to join the party in 1967. In early 1968 Carter formed the Southern California chapter of the Black Panthers and became a leader in the group. Like all Black Panther chapters, the Southern California chapter studied politics, read BPP literature, and received training in firearms and first aid. They also began the "Free Breakfast for Children" program which provided meals to the poor in the community. The chapter was very successful, gaining 50-100 new members each week by April 1968. Notable members included Elaine Brown, and Geronimo Pratt.

The Black Panthers were opposed by the secret FBI operation COINTELPRO, and the party was referred to as "the greatest threat to the internal security of the country" by J. Edgar Hoover. As revealed later in Senate testimony, the FBI worked with the Los Angeles Police Department to harass and intimidate party members. In 1968 and 1969, numerous false arrests and warrantless searches were documented, and several members were killed in altercations with the police. The "Breakfast for Children" program was effectively shut down by daily arrests of members, with all charges most often dropped within a week. "The Breakfast for Children Program" wrote J. Edgar Hoover in an internal FBI memo in May 1969, "represents the best and most influential activity going for the BPP and, as such, is potentially the greatest threat to efforts by authorities to neutralize the BPP and destroy what it stands for." Later that year, Hoover submitted orders to FBI offices: "exploit all avenues of creating dissension within the ranks of the BPP," and "submit imaginative and hard-hitting counterintelligence measures aimed at crippling the BPP."

The Black Panthers were also rivals of a black nationalist group named Us, founded by Ron Karenga. The groups had very different aims and tactics, but the groups often found themselves competing for potential recruits. This rivalry came to a head in 1969, when the two groups supported different candidates to head the Afro-American Studies Center at UCLA. Bunchy has a son who was born in April 1969 after Bunchy was murdered.

At a Black Student Union meeting at UCLA's Campbell Hall on January 17, 1969, Bunchy Carter and John Huggins, another BPP member, were heard making derogatory comments about Karenga, the founder of Us. Other versions mention a heated argument between Us members and Panther Elaine Brown. An altercation ensued during which Carter and Huggins were shot to death.

BPP members insisted that the event was a planned assassination, whereas Us members maintained it was a spontaneous event. Former BPP deputy minister of defense Geronimo Pratt, Carter’s head of security at the time, has stated in recent years that rather than a conspiracy, the UCLA incident was a spontaneous shootout. The person who allegedly shot Carter and Huggins, Claude Hubert, was never found. Later, during the Church Committee hearings in 1975, evidence came to light that under the FBI's COINTELPRO actions, FBI agents had deliberately fanned flames of division and enmity between the BPP and Us.

The LAPD responded to the attack by raiding an apartment used by the Black Panthers and arresting 75 members, including all remaining leadership of the chapter, on charges of conspiring to murder Us members in retaliation. (These charges were later dropped.) This reaction fueled claims that Us was being used by the FBI to target the Black Panthers. Later in 1969, two other Black Panther members were killed and one other was wounded by Us members.

In the years following the deaths of Carter and Huggins, the Black Panther party became more suspicious of outsiders and became more focused on defense rather than community improvement. The group eventually became marginalized, and officially disbanded in 1980.
Posted by Eddie G. Griffin at 7:38 AM