Carter and Tutu Plead for the Life of Kenneth Foster, Jr. 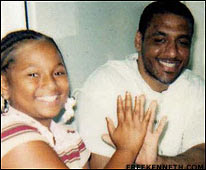 According to Keith Hampton, Foster’s lawyer, “We need four board members to be in favor of clemency in order for them to make the recommendation to the Governor. Then it is at the Governor's discretion whether to commute his sentence.”

My telephone interview with Keith Hampton was cut short when a call came in from Kenneth Foster, Sr., father of the condemned young man.

As a human rights advocate and a man of faith, I ask for your 11th Hour prayer for the life of Kenneth Foster, Jr., a young man who was in the wrong place at the wrong time with the wrong people.

Lord, have mercy on his soul and the soul of this nation.

Yesterday a Brief of Amicus Curiae on behalf of the Archbishop Desmond Tutu was filed at the U.S. Supreme Court in support of a Petition of Certiorari filed by Kenneth Foster’s criminal attorney Keith Hampton.

The Supreme Court is now poised to decide on Hampton’s cert petition for Foster on Wednesday, August 29. Hampton has basically asked the Court to intervene and fix the irreversible mistakes the lower courts have made in this case. Hampton’s petition argues that the Court of Criminal Appeals (CCA) wrongly decided that Kenneth is death eligible when it dismissed the writ petition Hampton filed in the CCA at court on August 7 and asks the Supreme Court to invoke its own original jurisdiction and exercise its supervisory powers over the lower courts.

“The Archbishop’s support sends a very clear and strong signal to the Court and it’s incredible that someone with such international regard and moral authority has come forward for Kenneth,” Hampton commented. “I’m very encouraged.”

Foster’s legal team and supporters hope that the support of such credible world leaders will influence the Governor and help win the four votes needed on the Board of Pardons and Paroles and the majority of the Supreme Court in Foster’s favor.

The Save Kenneth Foster Campaign, along with Foster’s legal team and thousands of people around the world, has petitioned the Governor and Board of Pardons and Paroles for clemency. The case has received considerable local, regional, and national media attention and public support for Foster has been pronounced.

Kenneth has been on Texas’ death row since 1997 for the shooting death of Michael LaHood, Jr. Foster did not shoot the gun that ended LaHood’s life, but was driving the car carrying the actual triggerman, Mauriceo Brown.

Foster was convicted and sentenced to death under the Law of Parties, which allows the state to seek convictions for those present at the scene of a crime as if they had committed it. Since Foster’s original trial, the other men in the car that night have testified that Foster had no idea LaHood would be shot.

If no relief is forthcoming from the state or the Court, Foster faces execution on August 30.