Towards Closure and Resolution in Taser Death of Michael Jacobs Jr 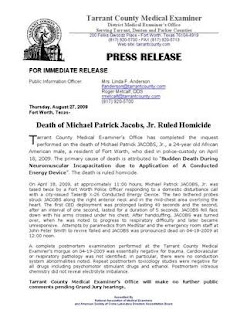 We now have closure in the Fort Worth Police Department’s taser death case of a 24-year old man, who had been diagnosed with mental illnesses. We have closure insofar as the Tarrant County Medical Examiner ruled the death of Michael Jacobs Jr. as a “homicide caused by the officer’s use of the Taser”. We have closure insofar as the officer admits administering two jolts of 50,000 volts to Jacobs’ body longer than the 5-second limitation. A 49-second jolt, followed by a 5-second jolt, caused a “sudden death during neuromuscular incapacitation due to application of a conducted energy device”, i.e. Taser.

Tarrant County ME Dr. Nizam Peerwani also ruled: “Repeat postmortem toxicology studies were negative for all drugs including psychomotor stimulant drugs and ethanol.” In other words, here was an innocent 24-year old African-American man with no drugs in his system at all. He was clean as a baby and healthy. And yet, in less than a minute, he is dead after being shocked with a taser.

A healthy man shocked to death in less than a minute says something of the lethality of the weapon used, i.e. Taser.

We now have closure in the cause of death: Homicide. But was it negligent homicide, by not taking the preliminary and necessary precautions as required?

The objective of the Taser X26 is to incapacitate. A five second during may not be lethal. Beyond that, the Taser is obviously lethal, as proven by over 500 deaths since 2001. To override the non-lethal level of deployment, an officer runs the risk of summary punishment by electrical execution. An officer should not override the product safety guidelines. To “unknowingly” override the product safety limit, Officer Phillips went beyond the purpose of incapacitating the subject Michael Jacobs.

The officer was negligent in the deployment of lethal force. Tasers can kill.

I believe that Cpl. Phillips and the entire Fort Worth Police Department are not convinced of the lethality of Tasers. They are too quick and easy to use, and officers have a willy-nilly attitude about using them. It makes their job easier. But, by the same token, it endangers the public.

If there had been a single trace of drugs in Michael Jacobs’ body, the Medical Examiner would have ruled like other medical examiners. It has been easy to attribute the cause of taser deaths to drugs inside the subject’s system, but not in this case. It is not the victim’s fault that he died in less than a minute after being tased. It was the Taser that killed him, albeit the officer may have thought it less lethal.

We also know that Michael did not have to die like this because we have been warning police departments all across the United States for years that Tasers Kill. These devices send out a 50,000-volt charge. If one of us shocked ourselves on an electrical outlet at home, we would get jolted with only 120 volts, and all of us know how that feels. This was 50,000 volts, not 120 or 240. Even when the state of Texas executed men on death row by electric chair, “Old Sparky” could only generate 20,000 volts.

TASER International, Inc. insists that it is not the voltage but the amperage, yet we know so little about the body’s own neurological electrical system. Dr. Peerwani was specific in determining the cause of death: “neuromuscular incapacitation”. In other words, the electrical signals from the brain to the muscles in the body completely shut down, including the heart muscle.

It is a fact that people in highly agitated states should not be tasered. Maybe it is because the neurological activities in the brain are more susceptible to increasing the amperage of the electrical shock. Some survive. Some die. Everybody’s neurological system is different.
Posted by Eddie G. Griffin at 12:06 PM